Constructed between 1915 and 1918, Laurel Run Dam was an earthfill dam with a masonry spillway erected across Laurel Run near Johnstown, Pennsylvania. It was built to replace a smaller dam in order to provide water for drinking and industrial needs for the growing population in and around Johnstown. The dam was built 42 feet high, 620 feet long, and contained just over 100 million gallons of water. The upstream face of the dam was rock-lined.

As early as 1943, the spillway at the dam was identified as inadequate to handle a large storm event, and a study advised that it be upgraded. Additionally, a dam assessment in 1959 noted that the spillway was less than half the size desired by the state. Despite these findings, no action was taken to increase the spillway capacity at the dam. In 1970, the dam was classified as high hazard, meaning a failure would have significant potential to cause loss of life and significant property damage.

In mid-July of 1977, torrential storms hit the Johnstown area, dropping up to 11.8 inches of rain in just 8 hours. This equated to approximately a 500-year storm. By 1:00 a.m., flooding resulted in loss of communication, and by 1:20 a.m. water reached the top of the dam and began to spill over the dam crest. By approximately 2:15 a.m. on July 20, 1977, overtopping of Laurel Run Dam scoured the downstream slope of the dam enough to cause the embankment to breach resulting in complete failure of the dam. As a result, the reservoir behind the dam was released in a catastrophic flood through the narrow two mile long valley downstream. The wave of water destroyed homes in the town Tanneryville, claiming 40 lives, before emptying into the Conemaugh River. The Laurel Run Dam failure accounted for almost half of all the deaths in the Johnstown floods of 1977.

“Laurel Run Dam is well known to me. We investigated this dam in the ‘60s. Its deficiencies were recognized and reports prepared for modification, but for various reasons, over a period of one-and-a-half decades, remedial steps or new construction was not taken. If the dam had been upgraded in accordance with today’s prudent engineering practice, the dam would have been able to store and/or pass the storm.”
- Elio D’Appolonia, a prominent Pittsburgh geotechnical engineer, in 1977 after the dam failure

At the time of the failure, there was no one present at the dam site. As a result, no warnings or evacuation notices were given before the dam breached. The National Weather Service did not issue any flash flood watches or warnings for the Johnstown area until 2:40 a.m., after the dam had already breached. Even this warning was very generic and did not name specific areas that would be affected. To make matters worse, there was no emergency action plan or procedures put into place beforehand outlining how to warn and evacuate people downstream of the dam. These factors contributed to the significant loss of life as there was virtually no warning for those in the flood path. All of the fatalities that occurred are believed to have happened within the first 2.5 miles downstream of the dam.

Throughout the decades leading up to the failure, the spillway capacity of Laurel Run Dam had been identified as inadequate numerous times. However, for various reasons, the spillway capacity was not increased. Experts predicted that if the dam had been rehabilitated in accordance with state dam safety criteria, it would have been able to safely pass the flood that occurred in July of 1977.

After the catastrophe, lawsuits came against the Greater Johnstown Water Authority, who owned the dam, as well as the previous owner, Bethlehem Steel Corp., and the Pennsylvania Department of Environmental Resources.  After over a decade of legal procedures, the case was settled out of court. 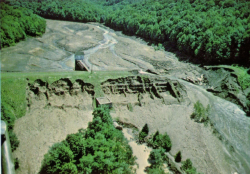 Looking down on Laurel Run Dam after the overtopping failure on July 20, 1977. Notice the scour marks on the downstream slope of the dam from the overtopping (Photo source: A.T. Rose, 2013 ASDSO Annual Conference). 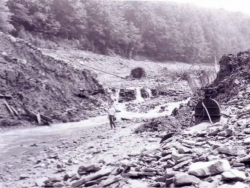 Looking upstream at a man standing in the middle of the breach of the Laurel Run Dam. 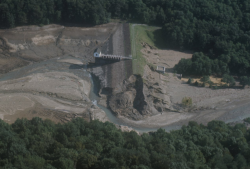 Side view of the dam after its failure due to overtopping. Notice the deep scouring on the downstream slope of the embankment. 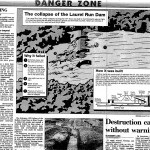 Special Report on the Failure of Laurel Run Dam