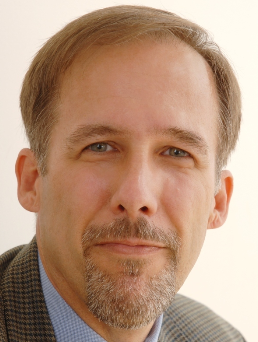 Testalinden Dam was constructed in the 1930s at the headwaters of Testalinden Creek at 1,810 m elevation near the summit of Mount Kobau, approximately 1,500 m above the Okanagan River valley below (see figures).  The 2.5 m high dam was constructed from silty-sand and glacial till using horses and a Fresno scraper. There was no engineering design or supervision during construction [2].

The original purpose of the dam was for water storage and irrigation [1, 3]. At the time of failure, the dam was assumed to be at full-supply level with an operable open channel spillway and an estimated reservoir volume of 29 acre-feet at top-of-crest. The portion of Testalinden Creek that extends from the dam site down to the debris fan apex at the valley floor is a steep, confined, V-shaped gully [4].

Ownership of the dam had changed hands a number of times. Repairs to address seepage problems were made in 1942, and a road was constructed across the dam around 1960 to access forest lands. By 1977-78, serious concerns about the dam’s safety were raised, and one report indicated that “the dam is in deplorable condition and should, in my (the inspector) opinion, be breached or rebuilt” [3]. Additional concerns were identified in inspection reports from 1985, 1988, and 1992. A subsequent review after the dam failure indicated that:

“… there was sufficient evidence to see a consistent pattern of concerns and warnings about the state of the structure dating back to the 1960’s. There is also no indication that actions had been taken to remedy the situation that has persisted for decades” [3].

At the time of failure, the dam was being used to supply drinking water for cattle in the summer [1]. 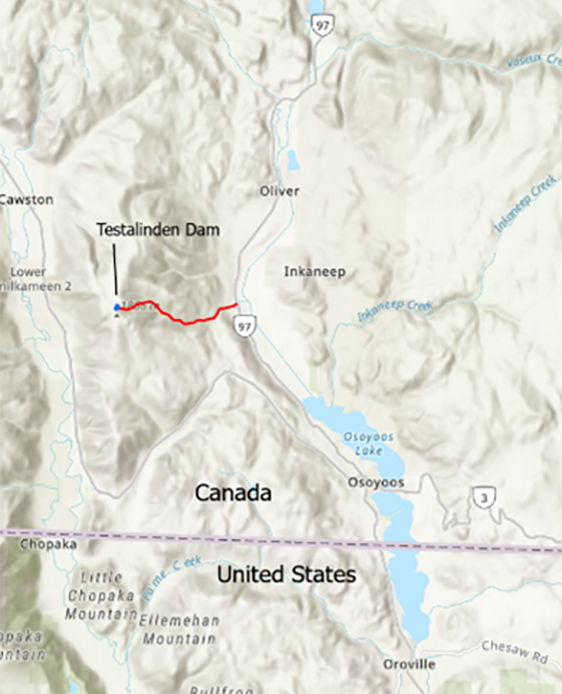 Location of Testalinden Dam in southern British Columbia. The debris flow pathway from the dam down to the floor of the Okanagan River valley is shown in red. (Photo Source: W. Johnstone using ArcGIS Pro)

In 2010, these types of dams in British Columbia (BC) were regulated under the 2000 BC Dam Safety Regulation [5] which had four loss of life consequences categories: Very High, High, Low, and Very Low. Testalinden Dam would have been classified in 2010 as Low Consequence, and in 2021 using updated legislation would be classified as Significant Consequence [6].

In the spring of 2010, the snowpack in the Okanagan region was above the long-term average, and the weeks before the dam failure coincided with the first period of sustained hot weather for the year.  No rainfall was recorded during the preceding three days or on the day of the event at the nearby Penticton weather station [1].

On Friday, June 11, 2010, a hiker noticed that Testalinden Lake was full and observed water from the reservoir overflowing both the dam and a road along the crest of the dam at the tallest portion of the structure where the sluice pipe was located. The hiker reported his observations at a local tourist information booth (discussed below). The dam breached two days later on Sunday, June 13 around 2:15 pm. A local engineering professor who performed a field investigation a short time after the failure drew the following conclusions:

“It is believed that the last surge of snowmelt, which was occurring at the time of the breach, created enough overflow velocity and resulting erosive energy to scour through a harder, grass-covered, section on the dam and expose a softer, more easily eroded earth core[…]

A subsequent investigation discovered that over 75 years of service, significant settlement, surface erosion and rutting due to vehicle traffic across the dam embankment may have reduced the freeboard to zero. The small culvert placed originally for overtopping protection and located to the north of the breach location never carried more water than a trickle of water and was effectively non-functioning as a spillway.” [1]

Table 1 – Key Properties of Testalinden Dam and the Dam Breach

The land use in the downstream impact zone below the apex of the alluvial fan is a rural, agricultural setting. The debris flow damaged or destroyed five houses as well as orchards and vineyards. The debris flow blocked the main north-south Provincial highway and caused over CAD $20 million in losses.

While it was fortunate there was no loss of life, there were a few close calls. In one household, a mother was home with her 16-year-old daughter Sunday afternoon when she heard “a roaring thunder sound that wasn’t stopping.” Testalinden Creek flows downhill next to her property and was “[j]ust a wall of mud … coming down the creek.” After collecting her daughter from upstairs, she saw “a mountain of mud” carrying her vehicle towards their house. They escaped the house via a rear door and evacuated as quickly as possible, running through orchards and hopping several fences until they reached higher ground. They then turned around and saw a “mountain of mud with our garage heading our way.” An RCMP Corporal observed that “people likely would have died had the slide happened in the middle of the night when people were in bed.” [9]

As noted above, a hiker had observed two days earlier on the Friday that Testalinden Lake was full, and that water from the reservoir was overflowing a road that crossed the dam. An opportunity to raise awareness with the correct provincial authorities and to attempt to intervene and stop the progression towards dam failure was missed. Although the hiker reported the overflow at a tourist information booth in nearby Osoyoos, and the message was dutifully passed along via the RCMP to provincial representatives, it did not reach the appropriate dam safety regulatory agency in time. A key factor was that the original message stated that a “forest road was overtopping” not that a dam was overtopping. This provided one of the key lessons learned and gave an impetus to improve signage at all regulated freshwater dams in BC.

Provincial Response to the Dam Failure

In the immediate aftermath, emergency response agencies, social service agencies, and Provincial agencies evacuated the impacted area and responded to the needs of local individuals. The BC Government compensated the affected parties beyond the limits of normal disaster financial assistance.

Given the severity of the event and the need to ensure public trust, the Province of BC took additional action. Four independent investigations of the cause of the dam breach were initiated, and the Commercial Investigations Unit of the government reviewed the dam’s history and investigated whether to proceed with formal charges against the dam owner [1]. However, two main activities should be highlighted:

Based upon the recommendation in the DSG’s review, many changes and improvements were made to British Columbia’s Dam Safety Program. Key accomplishments include the following: 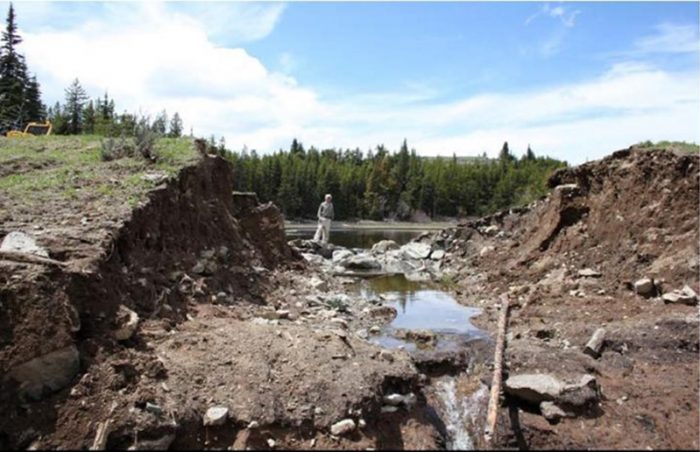 Testalinden Dam breach point looking upstream through the embankment towards the emptied reservoir. (Photo used with permission from the Province of British Columbia)

In addition to the changes to Dam Safety management in BC, important technical insights can also be learned from similar failures. Key insights can be gained from the 100-year historical record of dam failures in the Okanagan Region [1, 2, 15-17], many of which have relevance to regions in Canada and the Western USA:

A primary source for this Case Study is a paper written by Dr. Dwayne D. Tannant of the School of Engineering, University of British Columbia, Kelowna, BC, Canada [1].

The contribution of both is gratefully acknowledged.

(4) Martin, S., et al. (2011). Geological Hazard and Risk Assessment of Testalinden Creek, near Oliver BC, in 5th Canadian Conference on Geotechnique and Natural Hazards. Kelowna, BC.

(7) BCMOE. (2010). Response to Recommendations Contained in the Report: “Review of the Testalinden Dam Failure.” Ministry of Environment, Province of British Columbia: Victoria, BC.

This case study summary was peer-reviewed by Mike Noseworthy, BC Ministry of Forests, Lands, Natural Resource Operations and Rural Development. 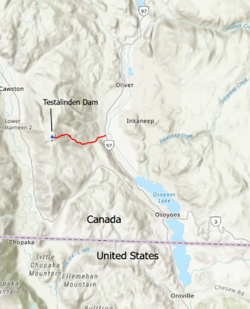 Location of Testalinden Dam in southern British Columbia. The debris flow pathway from the dam down to the floor of the Okanagan River valley is shown in red. (Photo Source: W. Johnstone using ArcGIS Pro) 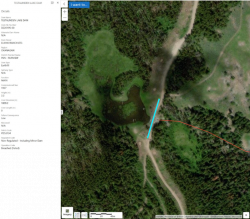 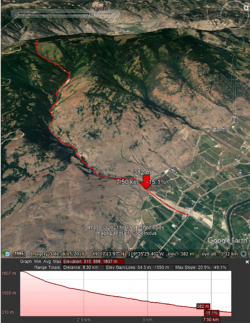 3D perspective view of the Testalinden Dam site, debris flow pathway, and downstream community impact zone. The dam was located at top left, the red line indicates the nominal pathway of the debris flow, the red arrow indicates the apex of the alluvial fan approximately 8 km downstream. The red line extends to Provincial Highway 97. Since the imagery is from August 15, 2010 (approximately two months after the dam failure) the extent of the impact zone can still be seen. The runout of the debris flow extends from the apex of the fan and along the valley floor. A nominal elevation profile is provided at the bottom. (Photo Source: W. Johnstone using Google Earth Pro) 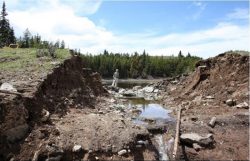 Testalinden Dam breach point looking upstream through the embankment towards the emptied reservoir. (Photo used with permission from the Province of British Columbia) 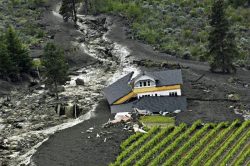 Dam Failure Debris and Damaged House. (Photo used with permission from the Province of British Columbia) 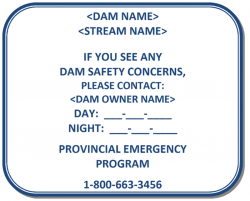 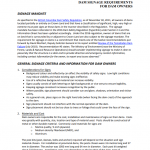 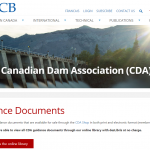 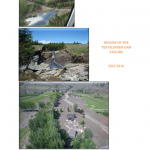 Review of the Testalinden Dam Failure 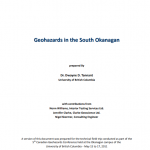 Geohazards in the South Okanagan 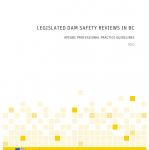 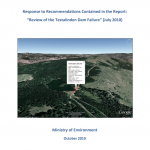 Response to Recommendations Contained in the Report: “Review of the Testalinden Dam Failure” (July 2010)