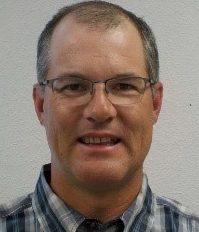 Prospect Reservoir Dam is owned by the Henrylyn Irrigation District and is located in Weld County, Colorado approximately 40 miles northeast of Denver.  The District operates and maintains a fifty mile long canal system, four reservoirs, and several hundred miles of supply ditches that supply irrigation water diverted from the South Platte River to 33,000 acres of farmland in the southeastern portion of the County.  On February 10, 1980, a breach along the south end of the dam occurred releasing approximately 2,870 acre-feet (935 million gallons or 3.5 million cubic meters) of water resulting in the flooding of homes and farmland downstream.

Prospect Dam is located five miles south of the Town of Keenesburg and was completed in 1914.   This Significant Hazard dam stores 6,367 acre-feet of water and has a dam height at the maximum section of 43.5 feet, crest width of 14 feet, and length of 5,300 feet.   The embankment consists of un-zoned earth fill composed of silty clays (CL), clayey silts (ML) and clayey, silty sands (SM, SL).  Construction of the dam during this period was accomplished by horse drawn earth moving equipment.  The upstream slopes of the dam at the time of the failure were 2 horizontal to 1 vertical (2:1) and protected with a 4 to 6 inch thick layer of concrete lining.

In 1973, an inspection report from the Colorado State Engineer’s Office (SEO) identified seepage and slope stability issues along the embankment.  Specifically, an 80-foot long longitudinal crack on the dam crest approximately 600 feet from the right (south) end of the dam with seepage emerging from the downstream toe and ponding below the dam.  The report stated that the cracking was indicative of a shallow slope failure.  An evaluation of the safety of the dam was done by the District’s engineer and a soils investigation and stability analysis found the south end of the dam between Sta. 4+00 and 18+00 to be marginally stable when the reservoir is full.  The evaluation found that the embankment material is poorly compacted sandy clayey silt that when saturated has very low shear strength.  This study recommended draining all existing ponds along the south toe of the dam, and the installation of a toe drain to lower the phreatic surface through the embankment.  In 1974, plans were approved for construction of a toe drain along the north and south reaches of the dam, construction of a stability berm along the maximum dam section, and enlargement of the emergency spillway.  The above improvements were completed in January 1975 and safety inspections were performed in 1976 and 1977.  The new toe drains were reported to be working well and no instabilities were noted on the embankment.  Normal flow from the toe drain was reported to be 100-150 gallons per minute. 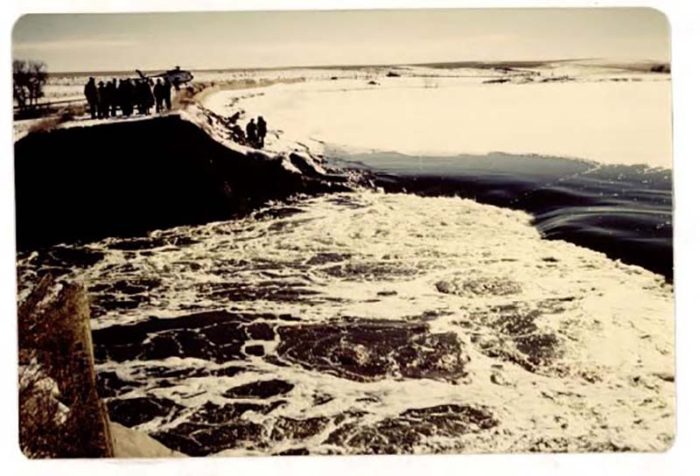 At approximately 9:30 a.m. on the morning of February 10th, 1980, local residents Rex and Ann Abbot reported to the District Superintendent seeing water flowing from a hole in the south end of the embankment and across the adjacent county road while they were checking cattle in a nearby pasture.  State Engineer’s Office inspectors were notified later that morning and arrived at Prospect Dam at 2:30 p.m. to observe water flowing through an estimated 100 foot wide breach near the south end of the dam at Sta. 8+50. The embankment section at Sta. 8+50 is approximately 15 feet in height and had 9 feet of feet of water stored against it when the event occurred.  The flow rate passing through the breach was estimated between 2,000 and 3,000 cfs.  A bulldozer arrived at the site around 5:30 p.m. and began building a cofferdam across the breach section.  There was concern that Lord Reservoir, located approximately six miles downstream, had nearly filled to the dam crest and was in danger of overtopping.  The small town of Roggin, located in the flood flow path downstream, would have significant flood damage if Lord Reservoir were to breach.  Sandbags were placed along the crest of Lord Reservoir dam to prevent overtopping and by midnight on February 10th the water level of Lord Reservoir began to drop due to the reduced outflow through the Prospect Dam breach section.  Early the next morning, the crews continued building the earthen cofferdam upstream of the Prospect Dam breach.  By 9:30 a.m., the breach section was closed and uncontrolled flow from the reservoir had stopped.

At the time of failure, the reservoir was one foot below the normal full level at gauge height 35.9 (storing 5,950 acre-feet) and the final breach elevation was gauge height 27 (3,080 ac-feet) resulting in a release of 2,870 acre-feet of water.  The final breach width was measured to be 83 feet and the peak breach flow was calculated to be 2,100 cfs based on post breach measurements.  In the weeks following the incident, a thorough forensic investigation into the cause of failure was done by the SEO and the District’s engineer which included: 1.) geotechnical evaluation of the breach section and foundation materials, 2.) excavation of test pits adjacent to the breach section and toe drain to determine the condition of the toe drain and filter material, and 3.) geophysical logging to determine if voids were present within the embankment.

The geologic investigation of the breach section done by the SEO geologist revealed the embankment along this reach of the dam rests on a 2 to 2.5-foot thick layer of pervious sand underlain by an impermeable clay layer that is interclad with gravel deposits.  This layer is laterally continuous beneath the embankment and extends downstream of the toe drain.  The embankment fill on each end of the breach section was observed to be dry and the underlying sand and clayey foundation layer was saturated, indicating foundation seepage was occurring.  The pervious sand unit would be susceptible to seepage along the contact between the sand and clay foundation, and with enough energy could move fine grained material within the cobble-gravel deposits.

The 1974 toe drain was excavated into the clay layer described above, and construction included a two stage filter consisting of an outer band of concrete sand with an inner band of coarse gravel (0.2 to 1.5 inch) around a perforated 6-inch asbestos concrete pipe.  The filter design did meet filter criteria, and test pits excavated along the toe drain alignment showed the filter drain material met construction specifications along most of the alignment; however, test pits in the area of the breach (sta. 7+00 to 9+00) showed the coarse band of filter material around the perforated pipe was poorly graded and larger in size than the specification allowed.  The coarse toe drain material in the area of the breach likely allowed embankment and foundation material to be carried into the drain pipe by way of the foundation seepage.

A significant amount of sand was found in the manholes downstream of the breach section as well as in the toe drain outfall box at the reservoir outlet.  Data from the geophysical investigation led to the discovery of several open joints along the south toe drain alignment which was likely the source of the sand deposits. The condition of the toe drain pipe through the breach section was difficult to evaluate due to the amount of mud surrounding it, but an open joint in this section would have also contributed to the piping of embankment/foundation material.  The District Manager said that in the weeks leading up to the failure, his staff noticed an increase in the toe drain flows.  Normal flow was 100 gpm (1/4 full) and the flow a week before the failure was measured to be 400-450 gpm (1/2 full).

The conclusions drawn from the forensic investigation of the dam failure pointed to a failure of the foundation of the dam caused by piping of foundation material into the toe drain through improper/coarse filter material and possibly an open joint along the toe drain within the breach area.  This condition over time led to increased seepage flow and surcharge of the toe drain, resulting in saturation of the toe of the embankment, which provided an additional path for foundation and embankment material to be carried away.  Repair of the breach section was completed in the fall of 1980, and included a cutoff trench through the breach section and replacement of the filter material and toe drain pipe along sections of the dam alignment. 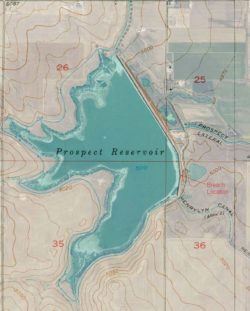 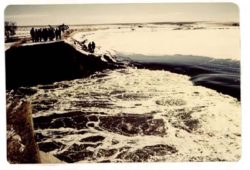 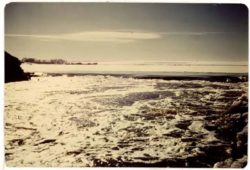 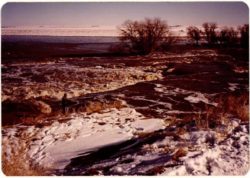 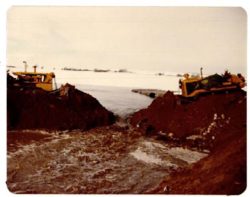 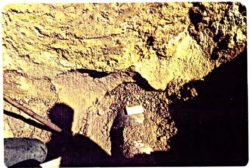 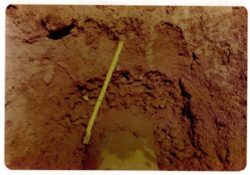 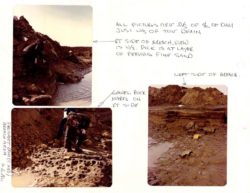 Photos of the breach section during the geologic evaluation. The pervious sand lens is visible in the upper left photo (Photo source: the Field Inspection of Dam Break, Allan Pearson, Colorado Division of Water Resources, Feb. 11, 1980). 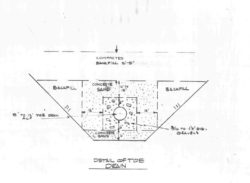 Animation of piping failures developed by the Association of State Dam Safety Officials.

Mark Pabst presents an overview of seepage monitoring and analysis of embankment dams as part of the Association of State Dam Safety Officials On-Demand Webinar series. 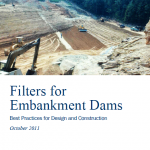 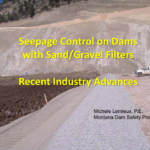 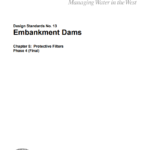 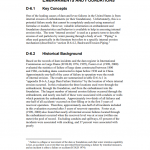 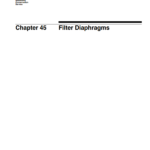