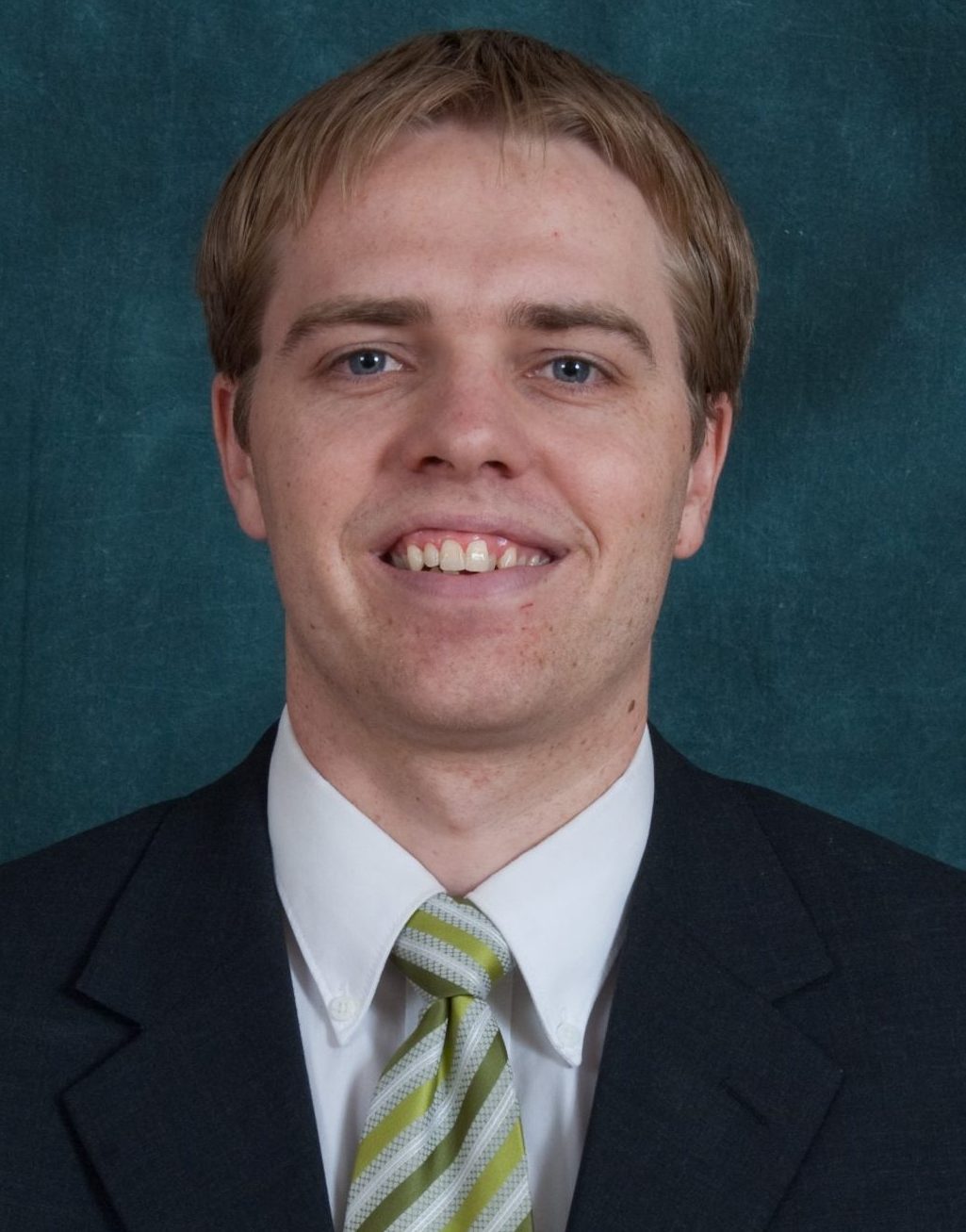 On February 26, 1972 at approximately 8:00 A.M., Coal Slurry Impoundment #3 at the Buffalo Creek coal mine in Logan County, West Virginia gave way sending millions of gallons of water and millions of cubic yards of coal slurry down the Buffalo Creek. Over the next three hours it would devastate the communities of Saunders, Pardee, Lorado, Craneco, Lundale, Stove, and 11 others. The wave washed away or demolished over 500 homes, left over 4,000 homeless and took the lives of 125 people. The impoundment was used as a settling pond for mining operation and was the third impoundment in that valley.  Impoundments #1 and #2 were downstream of Impoundment #3 and subsequently failed as well. All three impoundments had been built with almost no engineering involvement.  The only plans for Impoundment #3 was a sketch that had been drawn by the onsite vice president, Mr. Steve Dasovich. Inspections had been performed intermittently by the West Virginia Department of Natural Resources. They regularly found deficiencies that were left unaddressed and stated in a letter in April 1971 that all inspections covering a period from September 19, 1966 to March 25, 1971 had been unsatisfactory.  One of the concerns was the lack of ability to handle large amounts of surface runoff, and the Department called for an emergency spillway to be installed. The mine did install a largely inadequate 24-inch pipe that they called the emergency spillway. It appears that there was little to no engineering involved in the design or installation of this spillway pipe. 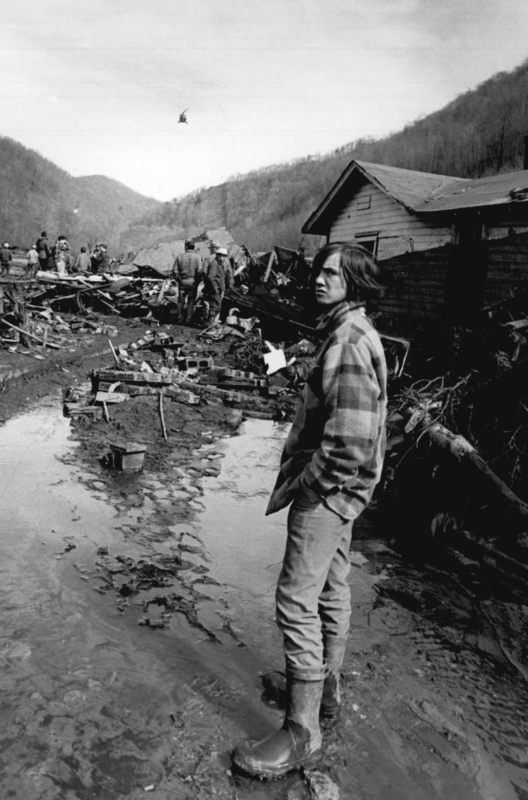 A young boy who survived the flood surveys the damage as others begin cleaning up on Feb. 26, 1972 (Photo source: The Herald-Dispatch copyright 1999).

Beginning on February 22, 1972, significant rainfall began to fall in the area. As the rain fell the water began to rise upstream of Impoundment #3. Because the elevation of the reservoir behind the dam was only controlled by water slowly seeping through the coal waste and the undersized spillway pipe, overtopping was a significant concern. Therefore, several site visits were made by both mine staff and community members. The authority for the dam was the onsite vice president who visited the dam many times and continued to insist that there was no need to fear. During his last visit (approximately two hours before the failure), he decided to add another spillway pipe.  On his way to tell his staff to install it, he ran into the local Sherriff who had been called by locals because of the fear of the impoundment failing.  He told the Sherriff, “The thing looks all right, we are going to do a little work on it.” Others were more concerned.  Mr. Denny Gibson, a heavy equipment operator at the dam, visited the dam several times that morning and with each visit told several residents of the possibility of dam failure.  His last visit was approximately 10 minutes before the dam failed.

The exact cause of failure is unknown.  Several people visiting the dam reported that there was little to no freeboard and the water was still rising. Given the limited amount of spillway capacity, overtopping was a significant concern.  However, those who visited the dam within minutes of failure noted that the pool had dropped significantly, reporting between 6 and 8 feet of freeboard. Also, downstream first-hand accounts noted an increased, muddy flow for a time before the over 30-foot wall of water hit. This indicates that internal erosion from increased hydrologic loading, or perhaps from seepage along the recently installed spillway pipe are more likely failure scenarios.

The Buffalo Creek disaster had significant impact on our nation. Because of this failure, hearings were held in the United States Senate.  Senator Henry Jackson opened the hearings by stating in part, “These occurrences (pointing to Buffalo Creek and similar failures) point up the grim fact that there are innumerable dams in existence throughout the United States which are under no effective public control to insure that they were competently designed and constructed initially, that they are being adequately inspected and maintained, or that the design remains adequate under current hydrologic conditions in the watershed.” These hearings led to the passage of Public Law 92-367, created the National Dam Inspection Program, and gave Secretary of the Army authority to begin an inventory and inspection of all the nation’s dams. 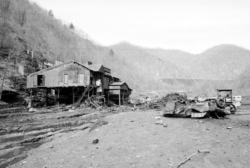 The destruction along Buffalo Creek included not only residential structures but several mining operations such as this one in the process of being demolished (Photo source: The Herald-Dispatch copyright 1999) 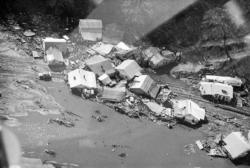 The flood wave not only destroyed over 500 homes but many floated downstream, ending smashed together, as shown in this photo (Photo source: The Herald-Dispatch copyright 1999) 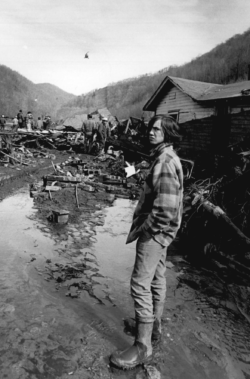 A young boy who survived the flood surveys the damage as others begin cleaning up on Feb. 26, 1972 (The Herald-Dispatch copyright 1999, used with permission). 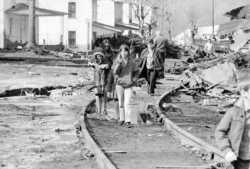 Families walk along the tracks on what remains of their community. Taken on Feb. 27, 1972, one day after the flood. Over 4,000 people were left homeless (Photo source: The Herald-Dispatch copyright 1999) 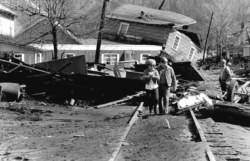 Edith Bucy, whose husband was carried to safety by Gill Aldridge, inspect the damage in the lower end of Larado with Lester Weese just days after the Buffalo Creek Flood (Photo source: The Herald-Dispatch copyright 1999) 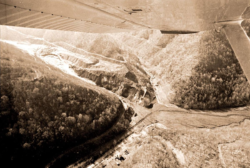 Aerial view of where Impoundment #3 failed just east of Saunders. Buffalo Creek runs westward along the far-left branch. Lee Fork is on the middle right. The Middle Fork, where the three dams were situated, is on the middle left and shows an empty reservoir (Photo source: The Herald-Dispatch copyright 1999) 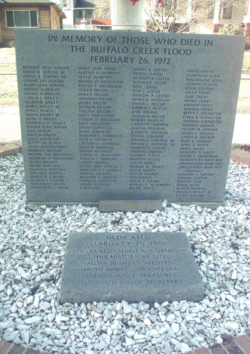 A memorial dedicated to the 125 people who lost their lives during the Buffalo Creek flood stands in a park in Kistler, West Virginia (Photo source: The Herald-Dispatch copyright 1999) 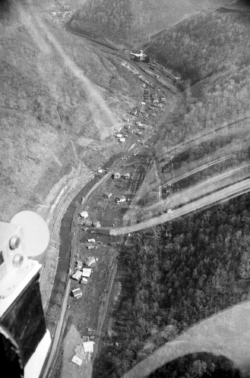 An aerial view of a portion of the flooded area along Buffalo Creek after the failure of Impoundment #3 (Photo source: The Herald-Dispatch copyright 1999) 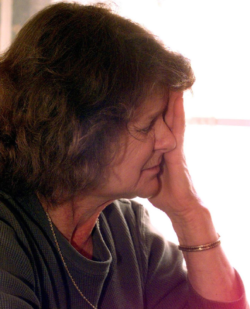 Mary Ann Osborne remembers her 10-year-old-son running into the house yelling “Mommy, mommy, mommy, the water’s coming.” Within seconds everything they owned was gone (Photo source: The Herald-Dispatch copyright 1999) 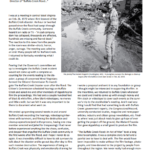 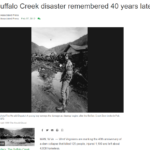 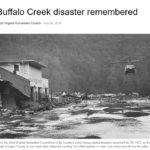 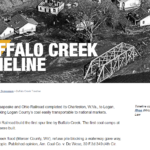