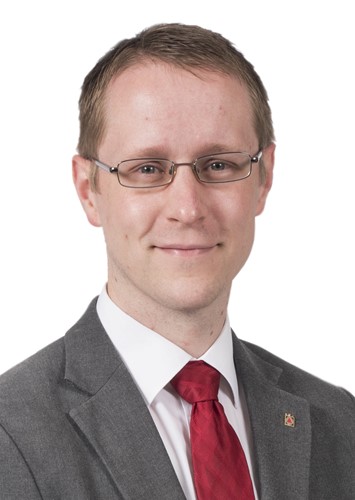 Several serious incidents have occurred at embankment dams in which flows leaving the constructed spillway exit channel have either endangered or hindered operation of the dam.  In particular, downstream of the formal spillway exit channel, spillway outflows have caused significant erosion of the downstream slope of embankment dams.  They have also impeded or prevented operation of low level outlets during flood events when these facilities are often critical to proper performance of a dam.  These incidents highlight the importance of evaluating and understanding spillway exit flow conditions and their potential to cause erosion at dams.  In many cases, the peak spillway flows during these incidents were significantly less than the design flood flows but still resulted in near breaching of the dam embankment or significant impairment of dam performance.

Erosion Potential due to Spillway Outflows

For many existing dams, the original spillway design was based upon simplified computational methods that neglected the complex, three-dimensional nature of spillway outflows downstream of the formal spillway exit channel.  Because of this, a common oversight is the lack of consideration of flow conditions that may endanger the dam.  If flows are redirected toward the dam embankment and are significant in magnitude or duration, then erosion of the downstream slope of the dam embankment can occur.  Unanticipated erosion or headcutting of the downstream spillway channel can also lead to redirection of flow toward the dam.  Dam designers and inspectors need to be aware of this potential failure mode when assessing or designing spillways.  The potential for these adverse hydraulic conditions can sometimes be identified during site visits or by reviewing design documentation.  However, one challenge in evaluating the potential for this failure mode is that it is not always evident during visual inspections.  In some instances, this condition can be caused or exacerbated by subsurface geologic features that are only exposed once significant flooding and erosion occur.  New or changing downstream conditions that are not part of the dam itself (e.g., roadway realignments, debris buildup) can also impact the trajectory of spillway outflows and contribute to these types of events. 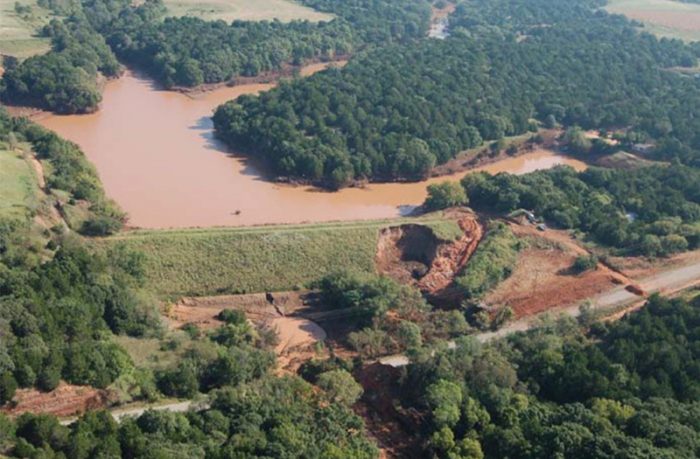 A prime example of this potential failure mode occurred at Sugar Creek Dam (L-44) in Caddo County, Oklahoma during tropical depression Erin in August 2007. Precipitation depths in the drainage area above Sugar Creek Dam were estimated to exceed 8 inches in less than 12 hours which caused activation of the auxiliary spillway of the flood control dam. Flows from the auxiliary spillway were discharged beyond the toe of the earth embankment but were redirected towards the dam after encountering the Highway 81 road embankment.  This condition was worsened by headcutting in the auxiliary spillway and eventual failure of the spillway dike.  Spillway outflows eroded the downstream slope of the dam and nearly breached the dam. Backwater from debris plugging the culvert under Highway 81 may have contributed to the unexpected flow conditions.  Ultimately, the erosion advanced through more than half of the width of the dam embankment crest.  Had spillway flows continued much longer, the dam would have failed due to erosion and instability of the remaining embankment material. As shown in the pictures, it was certainly fortunate that the dam did not fail given the extent of erosion and level of the flood pool.

Similar conditions have been observed at dams where the spillway discharge channel runs along or near to the toe of the dam embankment.  In September 2003, the auxiliary spillway of Upper Sherando Dam in Virginia was activated for the first time and experienced flow that was only a few inches deep.  The downstream exit channel of this spillway is oriented along the toe of the dam embankment and experienced significant erosion with depth of erosion of more than 20 feet in some places.  Had flows continued or been greater in magnitude, failure of the embankment could have occurred.

In addition to impacting dam embankments, spillway outflows have also been observed to erode nearby hillsides, road embankments or other important infrastructure.  This can occur over an extended period or suddenly during extreme flood conditions.  The potential for these negative consequences of spillway outflows needs to be considered, particularly if such erosion could threaten human life or impede access to the dam during an emergency.

In addition to potentially dangerous erosion, spillway outflows and deposition of eroded materials in the downstream channel can negatively affect dam performance and the ability to operate dam appurtenances.  For example, elevated tailwater levels can hinder operation or decrease the capacity of lake drain appurtenances and hydroelectric facilities.  Localized increases in tailwater could also impact the functionality of certain types of spillways (e.g., fuse plugs, fusegates, or flashboards) or cause submergence of uncontrolled spillways.  This may result in decreased spillway capacity and increased risk of overtopping.  On the other hand, lower than anticipated tailwater levels can reduce the effectiveness of stilling basins or other energy dissipaters, thereby increasing the risk of scour and erosion downstream of these facilities.

Once again, it is important to consider how tailwater conditions may change over time due to natural or man-made conditions downstream of the immediate vicinity of the dam.  For example, the construction of new road embankments or culvert replacements, the building of beaver dams and other natural obstructions, the failure of sizeable roadway embankments during a flood, or the buildup of sediment in downstream channels due to erosion problems at the dam may result in significant and even sudden changes in tailwater conditions. 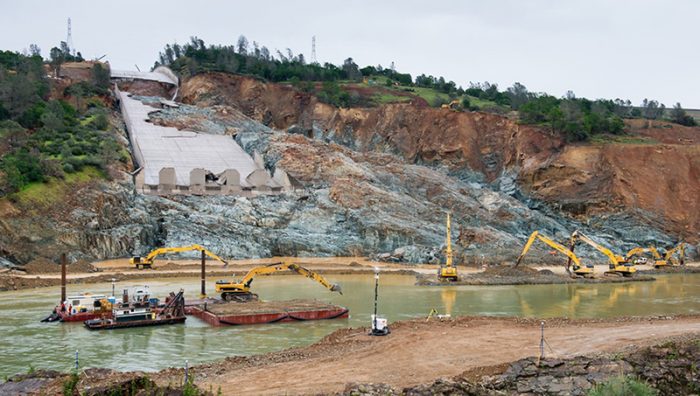 Debris removal in the diversion pool below Oroville Dam with the damaged main spillway in the background. (Photo courtesy of California DWR)

While the incident at Oroville Dam in California in February 2017 is well-known in the dam safety industry for the difficulties arising from its damaged spillways, a lesser known but vital aspect of this event was the effort to minimize tailwater levels to keep the Hyatt Powerplant, Oroville Dam’s hydroelectric generation facility, from flooding. Flows through the damaged main spillway and the activation of the emergency spillway resulted in significant erosion and deposition of more than 1.7 million cubic yards of material in the Thermalito Diversion Pool.  These deposits created a significant tailwater condition at the tailrace of the Hyatt Powerplant, rendering the powerplant inoperable.  If the powerplant had flooded due to elevated tailwater, the dam’s primary means of releasing water at levels below the main spillway crest and drawing down the reservoir pool would have been rendered inoperable for an extended period. Although the crisis was ultimately averted, it is important to note that the three primary means of diverting flow through or around the dam were simultaneously damaged or compromised.  When runoff subsided and the main spillway was closed, crews worked around the clock to clear a path through the material obstructing the downstream channel to lower the tailwater at the Hyatt Powerplant.

Best Practices in Assessment and Inspection of Spillways

Recent advances in hydraulic modeling and spillway integrity analysis enable engineers to more effectively identify potential failure modes due to spillway outflows than was previously possible.  For example, two- and three-dimensional hydraulic models allow engineers to analyze complex flow patterns for a wide range of flow conditions based on existing or proposed terrain.  These analyses can be helpful in identifying areas of high velocity that may be more susceptible to erosion.  They can also help engineers assess the impact of downstream features such as road embankments.  Detailed hydraulic models can be used to ensure that outflows are directed away from the dam embankment and to estimate anticipated tailwater conditions, including eddies, at the dam during various flooding events.

In addition to these hydraulic models, it is important to understand the geology of spillway outflow channels.  Subsurface investigation and testing can be used to define the erodibility of spillway outfalls and also identify underlying geology that could lead to problematic outflow conditions.  The NRCS has developed SITES and WinDAM software that include the ability to analyze the integrity of geologic profiles through both earth/rock cut spillways and embankments.  These are powerful tools to estimate the magnitude of erosion that would occur during a flood and to identify spillways that may be susceptible to failure should the design flood occur.

Above all, it is important for engineers who design, assess, and inspect dams to be aware of these potential failure modes and consider their applicability to a specific dam site.  The potential for complex flow conditions or significant erosion can sometimes be identified as part of a site visit or a review of design drawings and documentation.  Other times, the potential for this type of condition is not obvious but needs to be evaluated based on the underlying geology and other unique site conditions.  If the potential for this failure mode is identified, it should be investigated and validated through additional analysis, as appropriate. 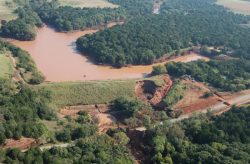 Debris removal in the diversion pool below Oroville Dam with the damaged main spillway in the background. (Photo courtesy of California DWR) 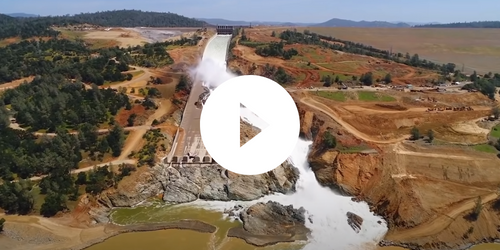 Practical Engineering: What Really Happened at the Oroville Dam Spillway? 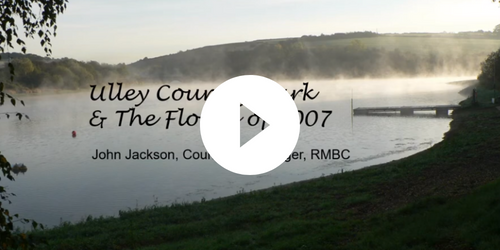 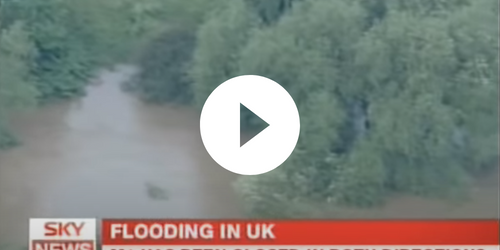 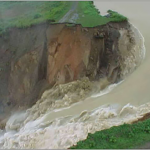 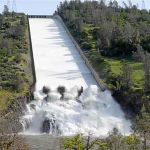 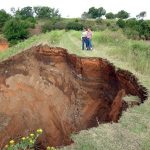 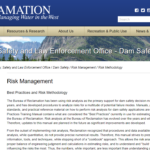 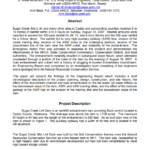 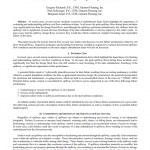 What Happens Downstream Stays Downstream, or Does It? Potential Failure Modes from Spillway Exit Flows 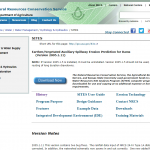 Erosion of Rock and Soil