Austin Dam (also known as Bayless Dam) was constructed between May and November of 1909 just outside Austin, Pennsylvania, a town of approximately 2,500 people in Potter County. The dam was a concrete gravity dam that stood 50 feet tall and 544 feet long. Austin Dam was constructed on Freeman’s Run with the purpose of supplying water to the Bayless Paper Mill, the primary employer in the town of Austin. Foundation issues, combined with several human factors caused Austin Dam to be a very troublesome structure. The dam stood for less than two years, during which numerous partial failures made it a constant problem and safety concern. The dam completely breached on September 30, 1911, releasing a flood wave that wiped out the towns of Austin and Costello, causing extensive loss of life and millions of dollars in damages.

The design engineer of the dam, T. Chalkley Hatton, was given two objectives by the company president George C. Bayless: (1) construct a dam able to hold a 200 million gallon reservoir, and (2) complete the project with a budget of $85,000. Nearing completion of the construction of the dam, it became evident that the cost of the dam would slightly overrun $85,000 dollars, and Bayless began pressuring Hatton to make alterations to reduce the cost. Hatton relented to most of Bayless’s demands causing the final dam design to violate or nearly violate what was considered sound engineering practice at that time. Additionally, Bayless began instructing the construction workers to raise the crest of the dam and spillway, increasing the storage capacity, all without Hatton’s knowledge.

“The failure of the dam to withstand the flood of Jan. 21 is probably due to two causes. One of these is that the great bulk of concrete which had been hurriedly built, some during freezing weather, and which had been completed but six weeks before the maximum pressure came upon it, had not set up so as to attain its ultimate tensile strength. The most important cause, however, was due to the water getting under the dam. This condition was not anticipated when building the dam, and all precautions which seemed to be necessary at the time were taken to guard against it”.  -T. Chalkley Hatton, 1910

The finished dam was constructed by excavating 7,925 cubic yards of foundation, setting 15,780 cubic yards of concrete, and depositing 6,360 cubic yards of earthen embankment on the upstream face. The dam was made of cyclopean concrete. In order to reduce costs, a minimal amount of iron rods were used to secure the dam to the foundation rock and the outlet pipe was fitted with a wooden bulkhead instead of a valve.

By December 1, 1909, the dam was ready to be filled. In mid-January, 1910, a warm period combined with rain caused a snowmelt that filled the reservoir behind Austin Dam within three days and the activation of the spillway for the first time. Shortly after, on January 22nd, a large slough occurred at the left abutment of the dam on the downstream side. Seepage flow was also detected along the toe of the dam and within the slide.

The next day, the dam slid downstream on its foundation, deflecting 18 inches at the toe and 31 inches at the crest and cracking in several places. T. Chalkley Hatton noted, “These cracks divided the dam into five or six distinct and separate sections.” Though divided, the dam remained anchored to the foundation rock.  However, the foundation was poor and the rock layers slid over each other. All of this occurred in a span of about eight hours and a notch was blasted in the crest and the outlet pipe cap was blown off using dynamite in order to lower the reservoir level. 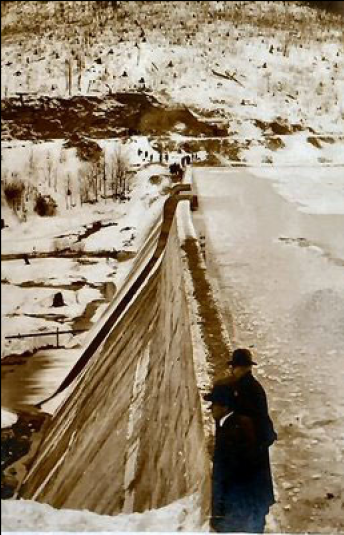 Hatton would later blame the partial failure on two main causes: (1) the concrete did not have sufficient time to reach ultimate tensile strength, and (2) water was able to get under the dam and exert a large upward force on the structure. This upward force greatly decreased the sliding factor of safety and allowed the foundation to slide on itself. Hatton consulted Edward Wegmann, an expert on gravity dam design, and together they developed repair options to present to George Bayless. The two engineers recommended extending the cut-off wall deeper and constructing a rockfill buttress downstream of the dam, but Bayless wanted to consult another engineer for a second opinion. While deciding on what measures to take, the reservoir was allowed to partially refill so that the mill could resume operation. Eventually, the reservoir rose to just two feet of the spillway crest. After seeing that the dam responded well to this, Bayless stated that by partially refilling the reservoir, “…we have practically proved that the dam has found a sound footing and will not slide further”, and none of the recommended alterations were made. Construction then commenced on a 30-foot-tall timber crib dam, to provide water for the mill while minor repairs were made to the concrete dam.

Within five months of operation, the timber-crib dam experienced seepage along its base, and by December ten inches of settlement were noticed along the whole length of the dam crest. The dam was drained and repaired. Over the next ten months, small repairs were made to the concrete dam to prevent leakage, which included closing the previous man-made breaches. Bayless later stated that during the dry months of the summer of 1911, the reservoir behind the concrete dam was filled to about 40 feet to supplement the streamflow and timber-crib dam when they didn’t hold enough water to supply the paper mill.

On September 15-17, 1911 heavy rains fell on the watershed behind the dam, and the Austin Dam filled to within several inches of the spillway crest. This was the first time the dam had a full reservoir behind it since the partial failure that occurred in January 1910. Several eye witnesses reported that by September 30th the reservoir level was within a half inch of the spillway crest and leakage through and under the dam was widespread and increasing rapidly. The mill superintendent did not visit the dam and refused to open the outlet works and lower the reservoir as he felt maximum water level was needed to optimize the mill’s productivity.

At some point between approximately 2:00 and 2:15 pm on September 30, 1911, the Austin Dam suffered a sudden and devastating collapse. No mill workers were present at the dam at the time of the collapse, and it was only witnessed by a few residents living near the dam and two people passing by in a car. The downstream towns of Austin and Costello were effectively destroyed by the wave of water released. 78 people lost their lives as a result of the disaster. Damages were estimated to be between $3-6 million (~$70-140 million in 2010).

The Director of Engineering at Lehigh University, Professor Frank P. McKibben, was hired to investigate the failure. McKibben’s findings concluded, “The failure of this dam is due to sliding as a result of faulty foundation, faulty design, faulty construction, and faulty operation.” The Chief Engineer of the Pennsylvania Water Supply Commission, Farley Gannett, also investigated the catastrophe and found similar reasons for failure. This incident was instrumental in Pennsylvania adopting dam safety laws and regulations. Since Freeman Run was not denoted a “public highway” or navigable waterway, there was no public jurisdiction over the dam at the time of its construction. In fact, the Water Supply Commission did not even have knowledge of its construction. Shortly after the failure, in 1913, Pennsylvania passed its first dam and encroachment act, giving the state power over dam design, construction, and operation.

Hatton readily blamed himself for the failure, stating “The failure of this dam was not the result of poor workmanship, but poor judgment upon my part. I should have sought the advice of a man more skilled than I in determining foundations for dams.”

The Austin Dam was never reconstructed, and remnants of the structure stand today in the same position as when the dam failed over a century ago. 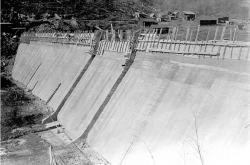 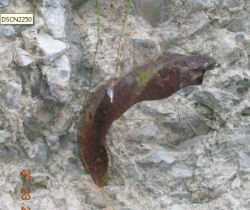 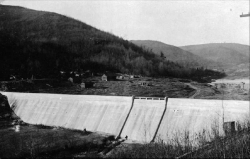 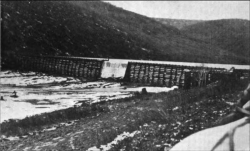 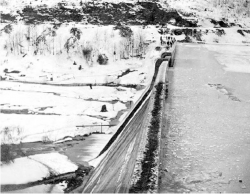 Bulging of dam crest east of spillway observed in January 1910. The uplift pressures caused layers of the foundation rock to slide on each other, resulting in the dam bulge (Photo source: the Potter County Historical Society). 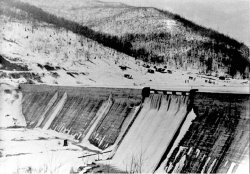 Seepage on the downstream face of dam in January 1910 (Photo source: the Potter County Historical Society). 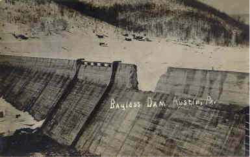 Concrete removed by dynamite to relieve pressure behind dam after near failure, January 1910 (Photo source: the Austin Dam Memorial Association). 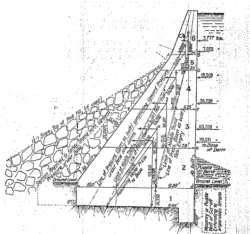 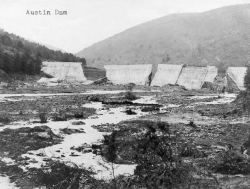 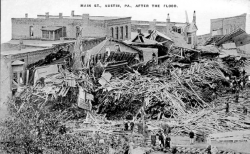 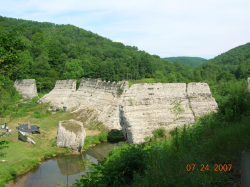 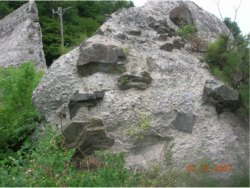 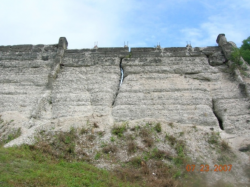 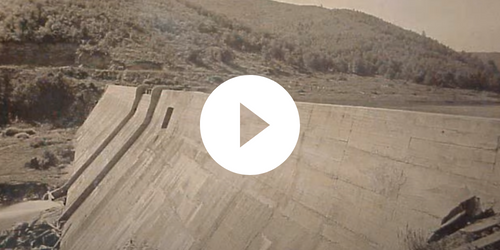 The Potter County Visitors Association presents a slide show containing descriptions and photographs of the Austin Dam failure and flood. 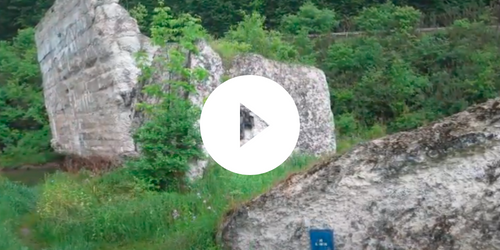 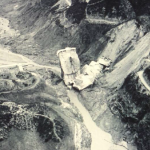 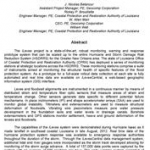 The Influence of Dam Failures on Dam Safety Laws in Pennsylvania 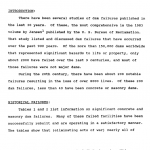 The Failure of Concrete Dams 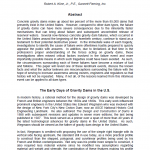 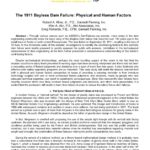