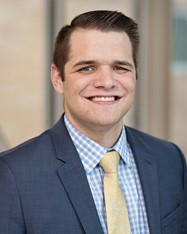 Construction of El Guapo Dam began in 1975 and was completed in 1980. The dam is 197 feet tall and stores 114,000 acre-feet of drinking and irrigation water for the Barlovento Region in the state of Miranda, Venezuela. Because bedrock is deep (approximately 65 feet below the original ground surface), the embankment was built on a sandy gravel soil foundation. An elastoplastic cutoff wall extends down from the clay core and ties into bedrock. The embankment shells are constructed of a sandy gravel material and armored with riprap. El Guapo dam had an eventful history including: a successful intervention that prevented a potential piping failure; a storm event that caused the pool to rise to within 3.3 feet of the dam crest (7.8 feet above the peak pool level of the inflow design flood [IDF]); and a reservoir breach due to overtopping of the spillway training walls. Each of these events and the lessons learned are described herein.

At the beginning of the dam’s service in 1980, clearwater seepage at the left and right abutments and at the toe of the dam was observed between 2.1 to 3.5 cubic feet per second (cfs). This behavior was monitored closely and a program for reading the installed piezometers was established. During the readings, a high-pressure anomaly was found in the clay core suggesting the formation of a fissure or other defect. High pressure readings were also found in the dam’s foundation, downstream of the cutoff wall. After further investigation, a concentrated leak was confirmed between the clay core and the cutoff wall. Intervention began immediately to seal the leak and stabilize the embankment. As the downstream riprap shell was cleared, it was observed that seepage was not only occurring at the abutments and at the toe of the dam but also on the downstream embankment slope, 120 feet above the toe of the dam. The seepage was clear, suggesting no removal of embankment material (Suárez and Suárez 2016). 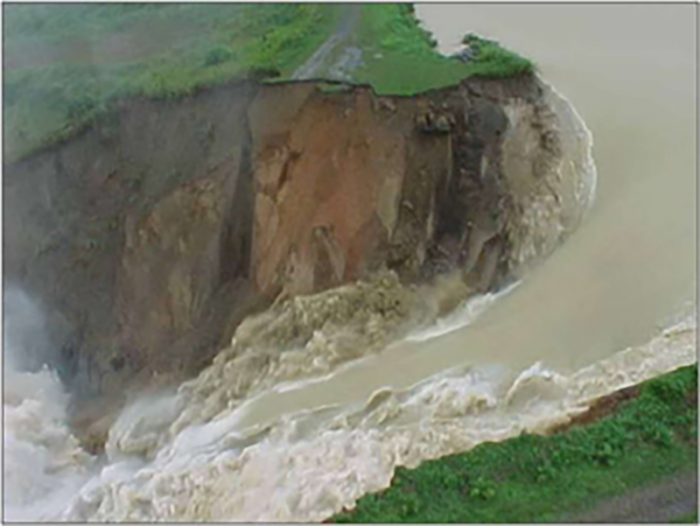 Analyses found that due to the increased pore pressure and large saturated portion of the embankment, the downstream slope of the embankment dam was barely stable, with a factor of safety of approximately one, indicating failure was imminent. Thirteen relief wells were constructed and injected with cement with the intent of sealing the leak at the downstream face of the clay core. This effort had little success at reducing the seepage. Next, material was added to the downstream embankment to form a supportive, stabilizing embankment at a flatter 3H:1V slope (original slope was 1.8H:1V). Calculations showed that the stabilizing embankment slopes increased the factor of safety to above 1.5. A drain was also constructed down both abutments and at the interface between the original embankment and the new supportive embankment; its function was to capture seepage and not allow it to saturate the modified embankment. These intervention measures were completed in 1995, taking a total of 15 years to complete. While seepage was not greatly reduced, the dam was stable (Suárez and Suárez 2016).

This near failure at the beginning of the dam’s service highlights the need for quality control and assurance during the construction process. Deficiencies during design (e.g., lack of filter and drain, steep 1.8H:1V slope) and construction (e.g., clay core/cutoff wall interference and a crack in the clay core) nearly caused the dam to fail. Although failure did not occur, intervention was costly. This experience also reiterates the need to closely monitor seepage, regularly inspect earthen embankments for imperfections, and intervene when deficiencies are found. Because of the intervention, the embankment was stabilized, and a potential dam failure was avoided.

The original dam had a 39.4-foot-wide concrete ogee spillway at El. 331.4 feet that discharged into a rectangular spillway chute and a hydraulic jump stilling basin that was designed using United States Bureau of Reclamation methods. The spillway’s capacity was designed at 3,600 cfs with 8.6 feet of head and 11.1 feet of freeboard (dam crest El. 351.1 feet), corresponding to the 10-3 (1:1,000) annual exceedance probability (AEP) event. Prior to construction, a 1975 hydrologic study estimated the 10-3 AEP inflow for the proposed dam’s 183 square mile watershed to be 23,700 cfs. This study used hydrologic data transferred from a nearby gaged watershed on the Rio Cuira whose hydrologic characteristics were considered similar to El Guapo’s (Suárez and Suárez 2016). It is unclear why the design was not revised based on the 1975 study results.

On April 12, 1981, during the final phase of spillway construction, a storm caused the pool level to rise 7.8 feet above the 10-3 AEP inflow design flood (IDF) pool level. It was evident the spillway was undersized. A new hydrologic study was conducted that increased the 10-3 AEP inflow to 45,100 cfs, a 90% increase over the previous estimate. The methods used for this updated study were not stated in the reviewed literature. The decision was then made to construct a secondary spillway. The secondary spillway was a 96.9-square-foot tunnel section controlled by a radial gate and located at the left abutment. The new spillway’s crest was 19.7 feet below the ogee spillway crest, and the radial gate was 19.7 feet tall and 9.8 feet wide, allowing the normal pool to be maintained at El. 331.4 feet (Suárez and Suárez 2016). 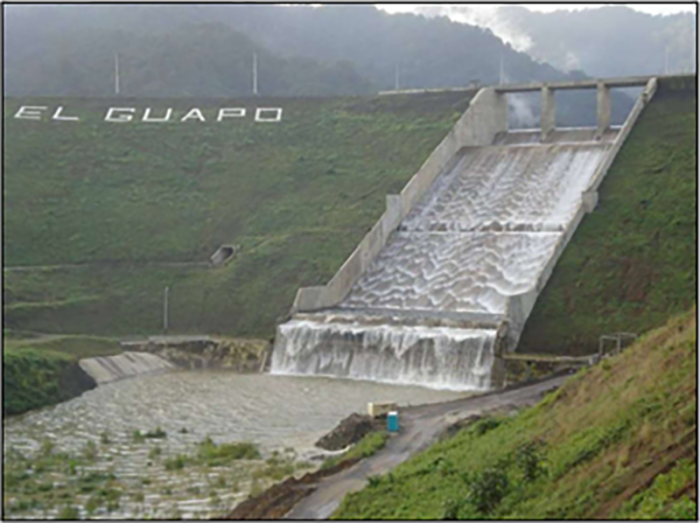 The first release through the newly constructed spillway in 2009. (Photo Source: Camargo Correa — Suárez and Suárez 2016)

In 1999, two periods of intense precipitation, that had not previously been exceeded, created widespread flooding that killed or injured thousands and caused immense damage to Venezuela’s infrastructure. The first period occurred during March and April in the country’s central region which caused various bridges to collapse. The second period occurred throughout December 1999 and January 2000 and was concentrated over the Venezuelan states of Vargas, Miranda, and Falcon, near the central coastal region of Venezuela. Nine hundred and eleven millimeters (23.14 inches) were recorded in Maiquetía, Vargas, Venezuela (approximately 100 miles northwest of El Guapo) on

December 14, 15, and 16 (Cárdenas 2000). The estimated peak discharges due to these storm events exceeded the 10-3 AEP (the dam’s IDF) and probable maximum flood (PMF) estimates for various river systems. The methods used to estimate peak flows at the time resulted in significant underestimation of flooding potential, as was demonstrated in the two aforementioned hydrologic studies for El Guapo (Suárez and Suárez 2016). This series of extreme precipitation events in December 1999 led to El Guapo’s failure.

The failure progression of the dam on December 16, 1999 was documented by a hydraulic engineer, Alfredo Hitcher, who was on site and is summarized as follows:

The peak outflow from the flood was approximated at 1.8 million cfs, with the flood wave between 25 and 40 feet tall. THe resultant flood destroyed 1.6 miles of highway; a bridge over the Guapo River; and downstream villages, farmland, and forested areas. The Barlovento region was left without its main source of potable water. Despite the evacuation orders (more than 10,000 people [Pedicini 2019]), a few sources estimated 10 to 20 deaths (Pedicini 2019), and 11,000 to 15,000 impacted. The cost of damages is unknown, but 800 to 1,200 homes were destroyed (Pedicini 2019) and another 1,500 were damaged (Suárez and Suárez 2016).

The dam never overtopped. The failure was first caused by the erosion of embankment material behind the walls; second, by the collapse of the concrete spillway chute due to undermining; and finally, by the erosion occurring at the spillway foundation which consisted mostly of erodible weathered shale. To prevent this failure mode on existing structures where training wall overtopping is of concern, spillway chute walls should be raised or otherwise modified to increase capacity. The previous seepage problems did not appear to contribute to the breach.

Reconstruction of the dam began in 2005 and was completed in 2007. The breach was filled with roller compacted concrete (RCC), which would form the foundation for a new ogee spillway. The IDF was increased from the 10­-3 AEP event to the probable maximum flood (PMF). In calculating the new PMF, various hypothetical events were superimposed to create multiple rainfall peaks to more closely replicate the temporal behavior of the December 1999 storm which caused El Guapo Dam to fail. Previously, the dam’s 10-3 AEP IDF was increased by 90% prior to failure, which led to the construction of a secondary spillway that likely prevented overtopping of the dam during the December 1999 event. However, this new analysis further increased the 10-3 AEP inflow estimate by an additional 280% highlighting the severity of previous underestimates. Reference to these studies could not be found and it is unclear what hydrologic assumptions changed to increase the peak flow estimates (Suárez and Suárez 2016).

The new spillway was designed to convey the PMF at 95,400 cfs, 27 times larger than the original IDF. To achieve this, the spillway crest width was increased from 39.4 feet to 141.1 feet and the spillway crest was lowered by 13.1 feet (Suárez and Suárez 2016).

The following lessons can be learned from this tragedy relating to the design and analysis of hydraulic structures: 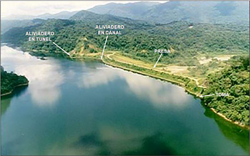 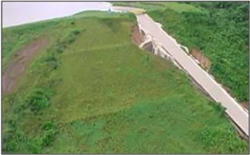 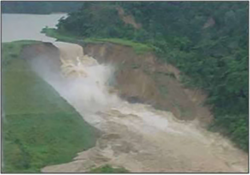 Collapse of the spillway exit channel. The trapezoidal concrete approach canal was still intact controlling discharge as can be seen by the cascade of water where the ogee control section once stood. (Photo Source: Alejandro Hitcher — Suárez and Suárez 2016) 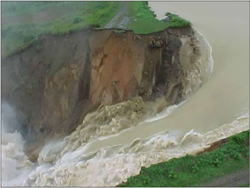 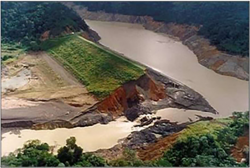 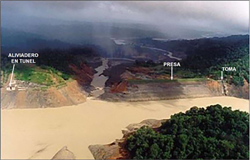 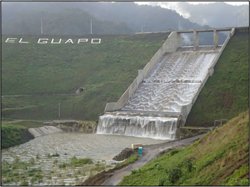 The first release through the newly constructed spillway in 2009. (Photo Source: Camargo Correa — Suárez and Suárez 2016) Various interviews of survivors of the El Guapo dam failure. 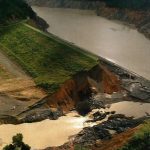 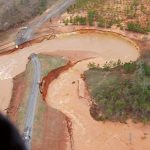 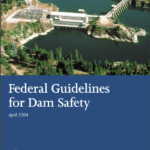 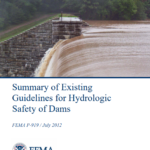 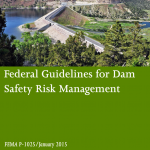 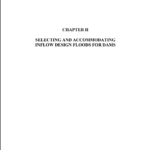 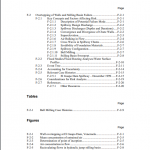 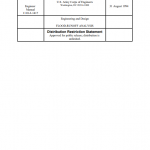