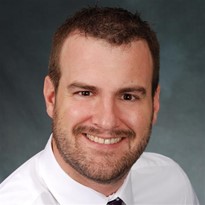 The United States Bureau of Reclamation (Reclamation) began construction of Glen Canyon Dam in 1956 as a part of the Colorado River Storage Project to provide water storage, flood control, and hydropower to Arizona, Colorado, Wyoming, Utah, and New Mexico. Glen Canyon Dam is the largest dam within the Project, at a structural height of 710 feet, crest length of 1,560 feet and its reservoir, Lake Powell, has a storage capacity of 26.2 million acre-feet². It took 17 years (from 1963 to 1980) for Lake Powell to fill, a longer time than was initially expected due to significant losses into the permeable Navajo Sandstone from which the Colorado River carved Glen Canyon.

The spillways at Glen Canyon Dam are located upstream of the dam and each spillway is controlled by two 40-foot by 52.5-foot radial gates. Flood releases through the spillways enter into steeply sloped (55 degrees below horizontal) spillway tunnels which connect to the downstream portion of the original diversion tunnels, which were used to divert the river during construction of the dam. A drawing of the spillway tunnel profile is shown on this page.

Constructing the spillways in this way, where hundreds of linear feet of each 41-foot diameter diversion tunnel are repurposed, was both quicker and cheaper to construct. The tradeoff, however, was that the bend where the spillway tunnel meets the diversion tunnel created the potential for cavitation. This danger was known by Reclamation, with both Hoover Dam and Yellowtail Dam experiencing damage from cavitation in their similarly configured spillway tunnels (Hoover in 1941 and Yellowtail in 1967).  The risk, however, was deemed to be minimal. According to W.L. Rusho, longtime public affairs officer for Reclamation, including the period during the Glen Canyon Dam incident, “A well-managed reservoir should almost never spill, and then only for very short periods, after which the cavitation could be repaired.”³

In January 1983, National Weather Service forecasts for spring runoff were predicting volumes at least 10% greater than normal. These forecasts were revised to 14% in April and then 20% above normal in May. During these months, the levels at Lake Powell remained high, beginning the year at 90% full and ending May at 96% full, leaving very little excess capacity to handle any significant flooding, much less the truly overwhelming volume of water that would flow into the 186-mile-long Lake Powell throughout June and into early July. 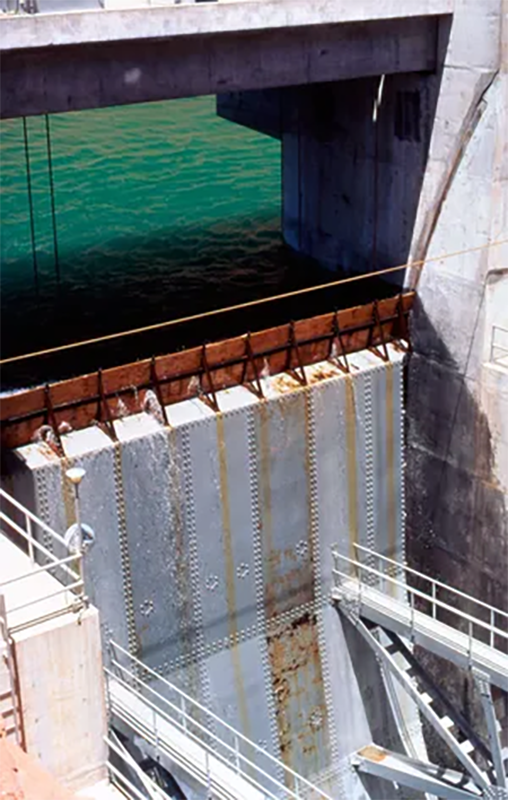 Plywood flashboards affixed atop one of the spillway gates. (Photo Source: Bureau of Reclamation via The Arizona Republic)

Beginning on June 2nd, the operators at Glen Canyon Dam begin to release 10,000 cfs through the left spillway, eventually increasing to 20,000 cfs. Up until this point, releases were made exclusively through the powerhouse; however, with the rate at which the reservoir was rising, it was evident that additional releases were needed. Early in the morning of June 6th, operators heard loud rumbling noises coming from the left spillway and observed material being ejected at the spillway outlet. The right spillway gates were opened, and the left gates were closed in order to allow for Reclamation engineers to access the tunnel spillway and assess the situation. What they saw was cavitation damage – chunks of concrete missing at the invert of the “elbow” – where the steeply-sloped spillway tunnel meets the horizontal diversion tunnel.

The operators knew that the reservoir was going to continue to rise and that they would have to meter out flows through the already damaged left spillway. The risk of uncontrolled flow overtopping the spillway gates was unacceptable, so crews immediately went to work installing four-foot plywood flashboards on the top of the spillway gates for both the left and right spillways to increase Lake Powell’s storage capacity. These plywood flashboards were then replaced with eight-foot steel flashboards in early July.

The operators were in a very difficult position, and not dissimilar to what would occur at Oroville Dam more than three decades later: significant predicted inflows and a rising reservoir forcing the use of a damaged spillway in order to protect the dam from uncontrolled overtopping.

For the following weeks, flows were primarily sent through the left spillway, and flows through the right spillway were held much lower. The right spillway tunnel was seen as being potentially more dangerous to the foundation of the dam because the right spillway tunnel “elbow” was nearer to the dam foundation than the left one, and as such the right tunnel posed a greater risk should cavitation damage reach the surrounding sandstone and spread horizontally. In late June, however, due to increased inflows, the operators were left with no choice but to pass more than 20,000 cfs through each of the spillways.

The reservoir elevation peaked at 3708.4 feet, 6.6 feet below the top of dam in mid-July, after which the discharges through the spillways were throttled down and eventually the spillway gates were completely shut. Once the spillway tunnels were dewatered and inspections could be conducted, the extent of the damage was finally observed. Engineers saw a 32‑foot-deep, 40‑foot-wide and 180‑foot-long crater at the elbow of the left spillway tunnel. Repairs commenced immediately, requiring over 3,000 cubic yards of concrete to backfill and repair the damaged tunnel linings.

Prior to the 1983 incident, engineers had identified the need to retrofit the spillway tunnels at Glen Canyon Dam with aeration slots as a cavitation control measure. However, the design had not been completed by the time the spillways were needed to pass the 1983 flood. Borrowing from their experience at Yellowtail Dam, Reclamation engineers designed air slots to be constructed while the spillway tunnels were being repaired. The air slots work by entraining air into the flowing water. This mixture of air and water is more compressible, which allows it to absorb the impact of the collapsing cavitation bubbles, thereby protecting the spillway tunnel surfaces from wear and damage caused by the cavitation. 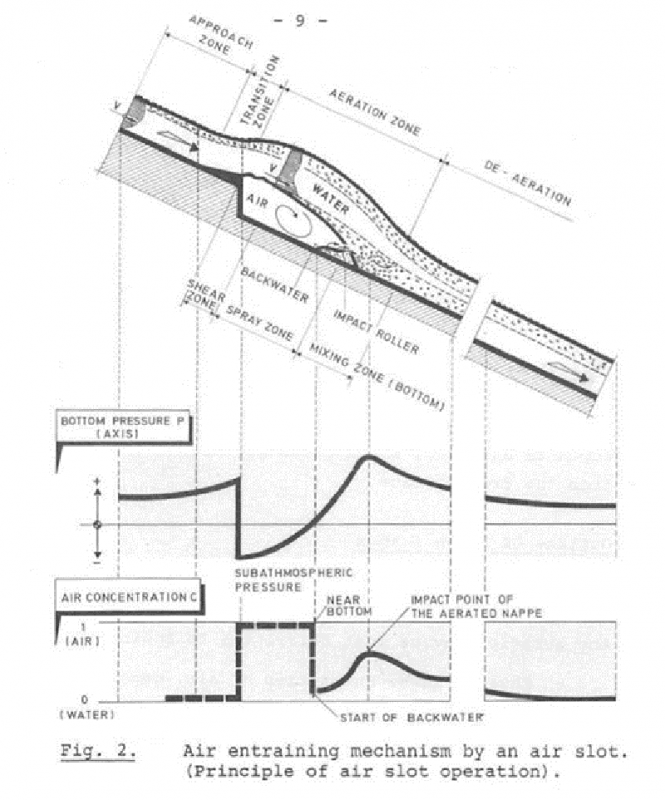 Repairs of the spillway tunnels were complete in time for the 1984 flood season, which marked another season of above-average flows. The spillways performed well and didn’t exhibit any signs of cavitation following the 1984 floods. It has been many years since the spillways at Glen Canyon Dam have flowed.

Throughout this incident, the operators at Glen Canyon Dam were forced to make difficult, critical decisions without a full understanding of what was occurring within the spillway tunnels. When damage to the left spillway tunnel had occurred, inflows were still projected to rise and preventing damage to the spillways had long since ceased being a consideration. The goal had become to save Glen Canyon Dam from failing and sending a 500‑foot wall of water screaming down the Colorado River, overtopping Hoover Dam and other major dams downstream, and severely damaging the water supply to much of the arid southwest which depends on the dams and reservoirs along the Colorado River.

Following this incident, Reclamation conducted detailed forensic investigations to better understand what exactly had occurred. The investigation identified the initiator of the cavitation to have been a 6.5 mm high calcite deposit which formed near the invert of the spillway tunnel. Another area of damage in the left spillway tunnel was found to have been caused by a failed epoxy patch which had been used to repair the hole left by a grout pipe⁷. 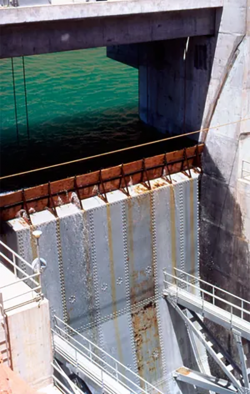 Plywood flashboards affixed atop one of the spillway gates. (Photo Source: Bureau of Reclamation via The Arizona Republic) 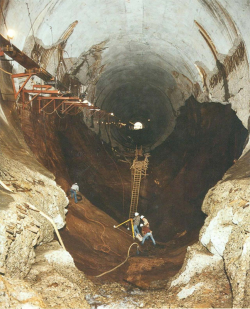 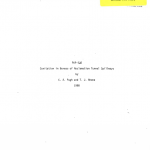 The International Symposium on Hydraulics For High Dams 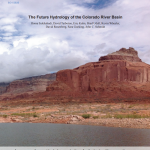 The Future Hydrology of the Colorado River Basin 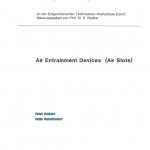 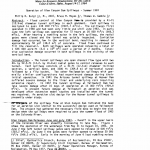 Reprinted from the Proceedings of the Conference for Water Resource Development 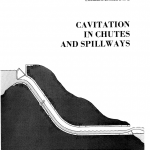 Cavitation in Chutes and Spillways 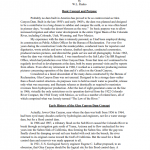 History Essays from the Centennial Symposium Volumes I and II